Gettin' Our Kicks: Chapter 1 - And So it Began 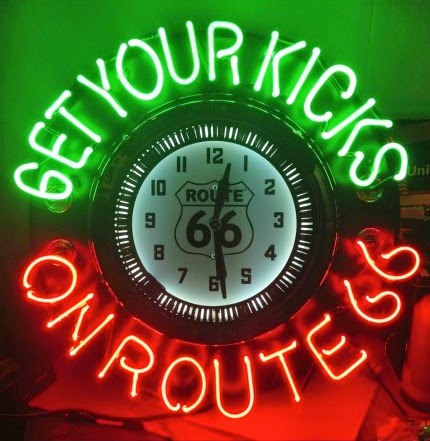 We had this conversation back in late Spring of 2010, a month or so before I was taking off on my one month motorcycle trip back and forth across the U.S., which included Route 66 - or at least most of it.

I had no idea that the old Route 66 TV show that ran from 1960 to 1964 was so popular in Germany. There are several organizations in Germany that revolve around the history and visiting The Old Mother Road.

At this point Judith did not even know how to ride a motorcycle, but at the urging (or maybe on a dare) from her friend Klaus, she was signed up for motorcycle riding lessons in order to get a motorcycle license in Germany.

Judith has a motorcycle license, she has her second bike (actually her third, but more on that later) and we are going to ride Route 66 (or at least more than half of it), plus a lot of other places, this Summer.

Now this might seem about as weird as Them, the Northern Ireland band from Belfast, singing Get Your Kicks on Route 66 back in the mid 1960's.

OK... maybe not that weird.

We kicked this Route 66 idea around for quite sometime and couldn't figure out how to get it organized. Judith needed time off, and we need two motorcycles in the U.S. and so on and so forth.

Sometime early last year we figured out how Judith could get the time off.  A colleague of Judith's at Siemens suggested that she should take a sabbatical, not an uncommon thing for a long time employee at Siemens. So, in simple terms this was a no-brainer - take a three month sabbatical - time off problem solved.

What do we Ride

I looked into renting motorcycles. You can kiss that idea good-bye. Way too expensive.

OK, we have motorcycles here, let's ship them over to the U.S. and then ship them back. Sounded good at first, but this is mighty pricey as well, plus there is U.S. and German Customs to fool around with, a bunch of logistics, blah, blah, blah.

One day Judith says, "Let's buy two bikes in the U.S., ride them and then sell them when we're finished with the trip." It didn't take me long to realize this was a brilliant idea - as long as we could find two bikes at a reasonable price. Then we sell them later, with some depreciation, but less than renting or shipping our own. Well, at least this is the theory.

We had planned to go to San Francisco over the 2014 Christmas Holidays. I figured I'd use some of the time to check with motorcycle dealers in the Bay Area and see what I could come up with. In November I got on line to locate possible dealers and look at their current used bike inventory.

Judith decided she wanted to find a Triumph Street Triple like she is riding now. The size is right, she's familiar with the bike and likes it a lot. I would settle for most anything BMW-wise. There a couple of BMW-Triumph dealers in the Bay Area, so I targeted them first.

It was disappointing. The used bike selection was pretty thin. But, what the hell, I figured I would stop in at these dealers and tell them my story so they could keep an eye out for the right bikes. Once the bikes were found we buy them remotely and have them waiting when we arrived end of May.

About mid December I extended my search for motorcycle dealers further out of the San Francisco Bay Area. I found A & S Cycles in Roseville, Calif., which is about 125 miles East of San Francisco. I actually knew the dealership, but had forgotten about them.

Their used bike inventory was far richer than any other I had found. Sure enough they had not one, but three Triumph Street Triples that were barely used. Plus they had several one and two year old BMW's that fit the bill perfectly.

Next Chapter: Buying the Bikes and Getting Organized