Highlight for each State:
Cal.  Bluest sky
Ariz.  nicest clouds
New Mex.  pass with care
Texas  I can see for miles or bugs eat you

June 25, Abilene to Fredericksburg
Yesterday night we figured something out to get us over the boring stretches: whenever we see a sign for an historic landmark, we have to invent a story matching this landmark. This was pretty funny - we took turn inventing these stories and got quite some laughs out of them. In Brady, I saw my first Pecan tree, taking our lunch break at the town plaza. Later, I had to get gas and experienced my first German style gas station in the US: first pump, then pay. Finally, Fredericksburg greeted us with "WILLKOMMEN".

June 26, resting day in Fredericksburg
In the morning we watched humming birds at a blossoming Yucca, later we did a long walk through all of downtown and back (which was not so long because Fredericksburg's downtown is so big, but because the hotel was at the edge of town). We can watch the main road from this porch: you have to drive a Ram or at least another truck in Texas - everybody does this.

June 27, Fredericksburg to Austin
Rain was predicted for Fredericksburg and Austin for the afternoon. We got an early start, stopped in Luckenbach (a one dance hall town) and arrived in Austin before the rain. Spent a nice evening with Jerry and Kate. 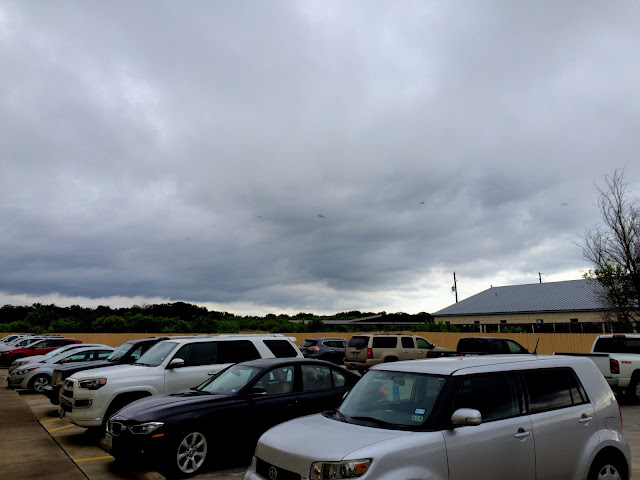 The weather radar and sky didn’t look too inviting this morning, so we decided to get an early start to Austin. It turned out this wasn’t necessary as the weather broke up and there was no rain at all. This was good, but it meant we missed out on some fine roads because we took a more direct route to Austin. Drat!

We did find a couple of  fabulous roads – no traffic with nice sweepers. There are plenty of  excellent roads in the Texas Hill Country, which we missed. Guess we’ll need to come back another time.

A short ways outside of Fredericksburg is the community of Luckenbach – famous for being the subject of the song "Luckenbach, Texas (Back to the Basics of Love)", sung by Waylon Jennings (written by Chips Moman and Bobby Emmons).

A bit about Luckenbach

Luckenbach’s oldest building is a combination General store and reputedly opened in 1849 (or maybe 1886). The community, first named Grape Creek, was later named after Carl Albert Luckenbach. Luckenbach's population increased to a high of 492 in 1904, but by the 1960s, it was almost a ghost town. A newspaper advertisement offering "town — pop. 3 — for sale" led Hondo Crouch, a rancher and Texas Folklorist, to buy Luckenbach for $30,000 in 1970, in partnership with Kathy Morgan and actor Guich Koock. Crouch used the town's rights as a municipality to govern the dance hall as he saw fit.

Today Luckenbach maintains a ghost-town feel with its small population and strong western aesthetic. One of its two main buildings houses the remnants of a post office, a working saloon, and a general store. The other is the dance hall. The post office was closed on April 30, 1971 and its zip code (78647) was retired. The general store remains active as a souvenir shop where visitors can purchase a variety of items, including merchandise featuring the town's motto "Everybody's Somebody in Luckenbach", include postcards, T-shirts, sarcastic and humorous signs, and the local newspaper, the 8-page monthly Luckenbach Moon.

Today Luckenbach is mainly known for Country Music, hosting live music almost daily. We were too early for the day’s free live music, which was a darn shame. Rosie Flores, who sings alternative country music and has a beautiful voice, was going to play later in the afternoon for free. But alas we could not stay. 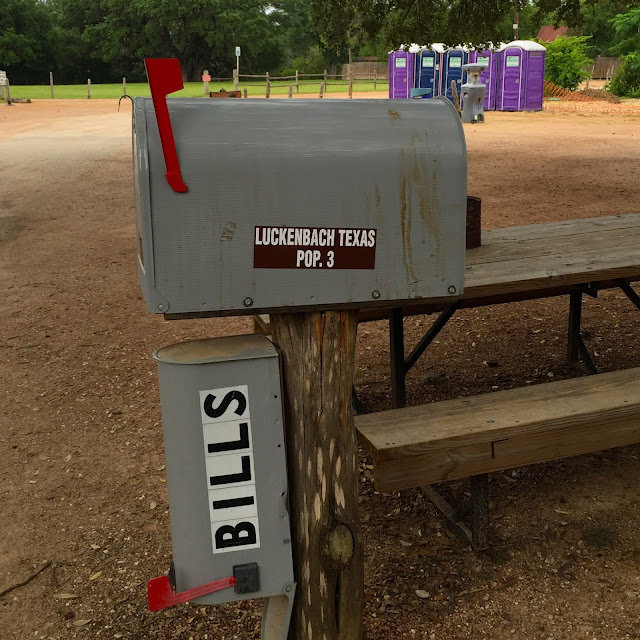 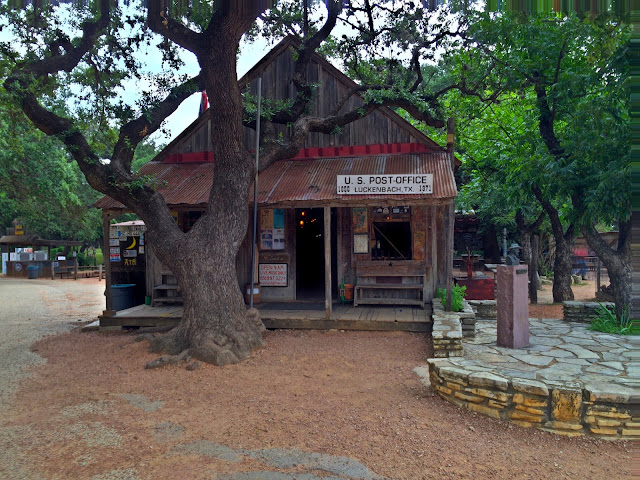 We headed towards Austin on a couple of different two lane rural routes with 65 MPH speed limit. This was pretty easy to maintain!

We arrived at Jerry and Kate’s early and regrouped. Jerry is my oldest son and Kate is his fiancé. They both hold positions at the University of Texas in Austin, but are new to Texas, via Manhattan. Between them and prior to Austin, it was Columbia, Yale, Stanford and UCLA - somewhat different environments. I was anxiously awaiting to hear about their new cultural experiences.

They would be arriving from a conference in San Francisco later in the day, so we let ourselves in and proceeded to make a mess of their home.

It was good for us to catch up with them again. The last visit was in San Francisco over this past Christmas / New Years – just before their move to Austin.

Gettin' Our Kicks: Chapter 28 – Day 22 A Day in Fredericksburg

Right across the street from our motel was the Bavärian Inn Restaurant – a Bavarian style Inn (?). Fredericksburg has several Germany style restaurants and shops. We walked over and had dinner at the Bavärian Inn. 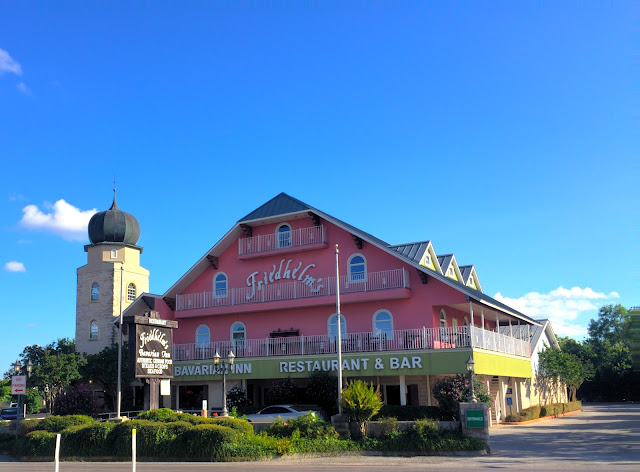 As a matter of fact, the entire community has a strong German influence as Germans founded it in 1846. The original settlers had migrated to the area from New Braunfels, TX, which had been established the previous year.

The Adelsverein (German Noblemen’s Society) organized hundreds of people in Germany to settle in Texas. Immigrants from Germany began arriving at Galveston, TX in July, 1844. 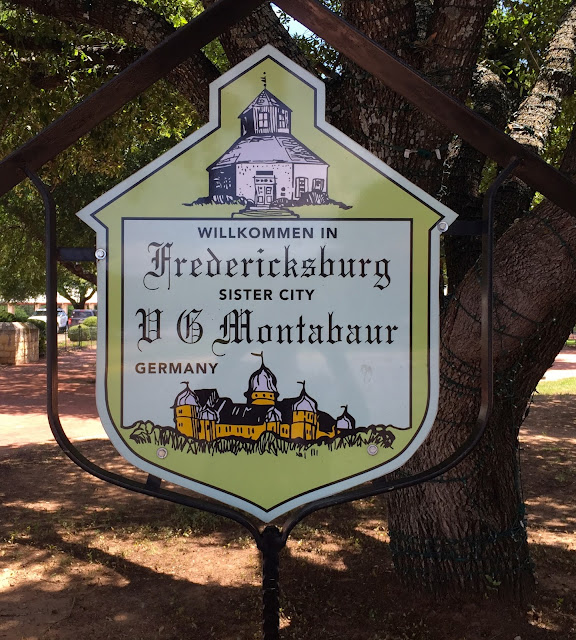 So, back to dinner last night – the Bavärian Inn was not too bad, but the Bavarian style of food has transgressed to the tastes of us Americans.

We noticed that Bavärian Inn was spelled incorrect – they added an umlaut a (ä). Then later we realized a lot of the German words throughout the town had umlauts added that were incorrect. Not sure why, but maybe it was to give a more German look, or it was due to the Texas German that the early settlers developed.

At any rate Fritztown, as older residents sometimes call Fredericksburg, is a nice community and certainly worth the visit.

Our walkabout as pretty hot and long – from one end of town to the other and back – around 6 kilometers in length. 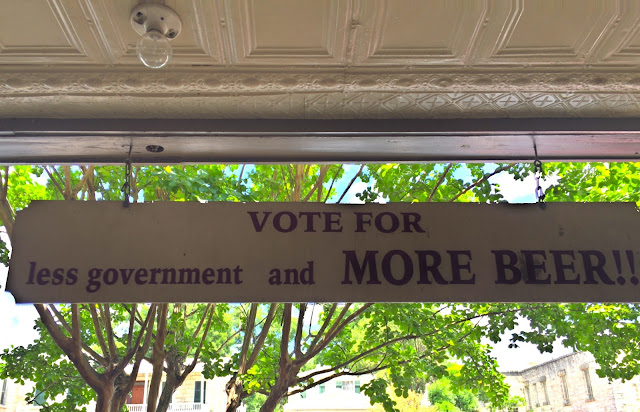 We had nice lite lunch at the Ausländer Biergarten and Restaurant, which served more traditional German food than the Bavärain Inn. 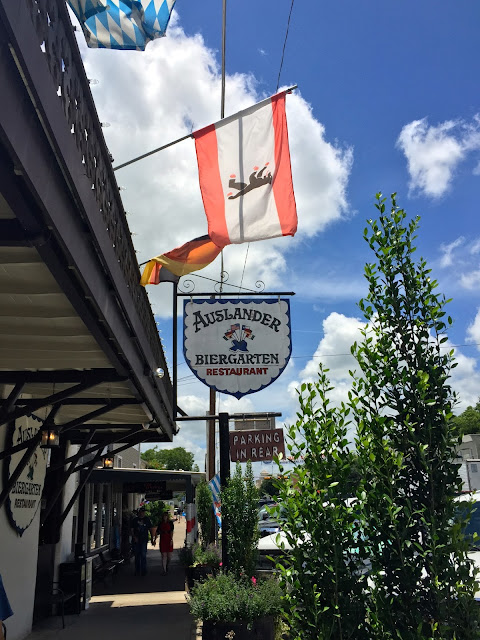 Fleet Admiral Chester Nimitz, who played a major role in the naval history of WW II as Commander in Chief, United States Pacific Fleet, was a resident of Fredericksburg. His family goes back several generations as residents of Fredericksburg. There is a superb museum in his honor. 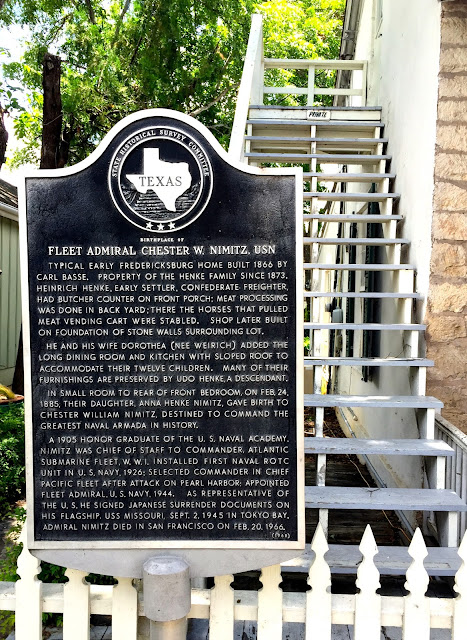 After a well-deserved rest and couple of beers we had dinner at Porky’s Hamburger and Onion Ring Co. Authentic good old hamburgers, fries and onion rings.

After Porky's we waddled back to the motel and sat on the porch, watching the traffic go by. Most of the vehicles were; 4 x 4, long wheel base, king cab pick-ups with loud mufflers - predominately Dodge Ram verity.

I slept in a little bit today. Judith was up at her usual 6:00 AM, but I stayed in bed until 8:00. After coffee, a shower and breakfast I got my act together and packed and loaded up my bike. Judith was way ahead of me.

We went to a gas station down the street to fill up. I checked the oil in both bikes and they both needed about a half a liter each. I had a full liter with me so that was now empty. Judith’s chain needed to be lubed and I pulled out the chain lube spray can – empty. Oh yeah, I said, I meant to buy some a few days ago.

Once again luck was on our side. There was a Harley-Davidson, Honda, Suzuki dealer a half a block away. Now this actually seemed mighty strange to me. It is not often you would see a Harley dealer with other brands as well. Got a spare liter of oil and some chain lube, and then lubed Judith’s chain. So, about 11:15 or so we were on the road.

We stopped in this nice town of Brady for a lunch break. It looked like the town is at a cross roads for several highways and all the traffic goes through the center of town, and past a nice plaza with an old WWII (or WWI) cannon in front of the city hall, grass and a whole bunch of Pecan trees. There was a bench under a big Pecan tree with our name on it, so was just sat right down and had an apple, some cheese, chips and water and watched the traffic go by. It was down right pleasant.

The morning started rather pleasant as far as the temperature – mid 70’s. This did not last long and soon it was high 80’s with the mid 90’s to come. 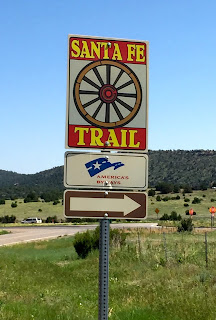 The pre-1937 alignment of Route 66 followed the Santa Fe Trail, a pretty old route that started in the 1820’s in Franklin, Missouri and ended in Santa Fe. The Santa Fe Trail served as a vital commercial highway until the introduction of the railroad to Santa Fe in 1880. After 1937 Route 66 was realigned to run through Albuquerque.


Other than the history attached to the route, it is boring at best. Long, straight and today seriously hot.

We connected with I40 after a couple of hours – more long straight and boring – and oh yes hot.

Santa Rosa, NM has a small, but interesting Auto Museum and we stopped in for a visit. The museum houses about 30 cars, mostly hot rods and mid 60’s Mussel Cars – opps, make that Muscle Cars. Some of the cars are for sale, but most are not. 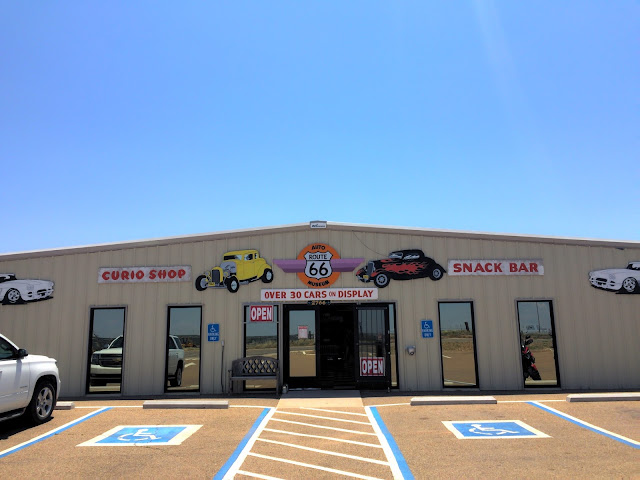 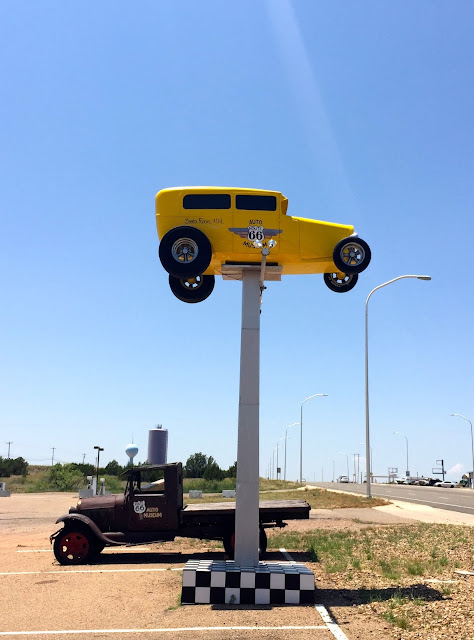 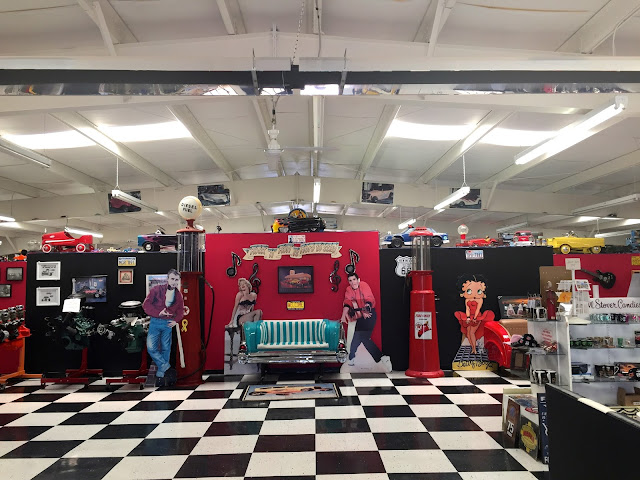 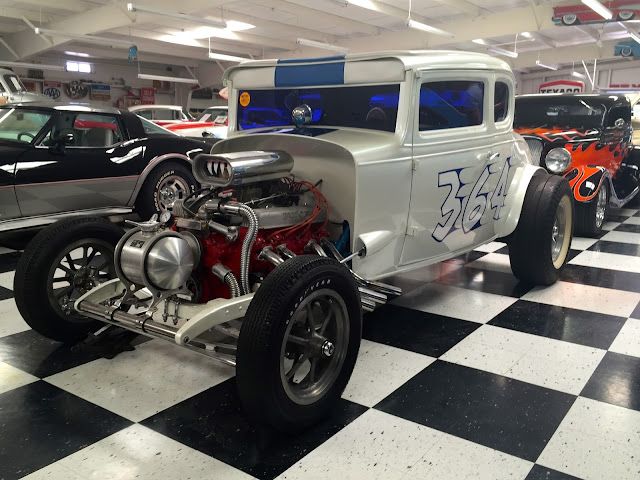 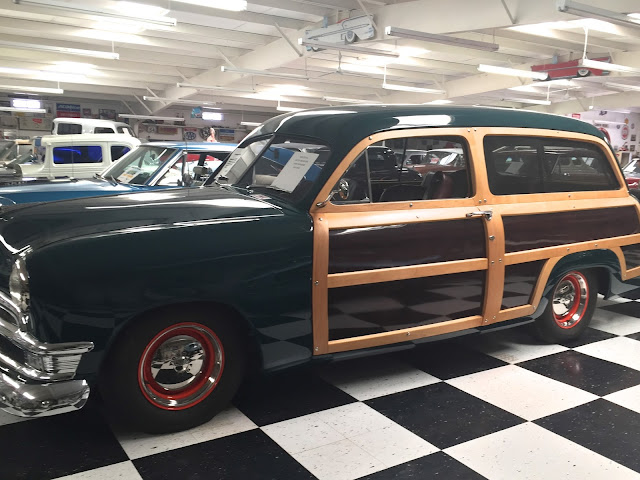 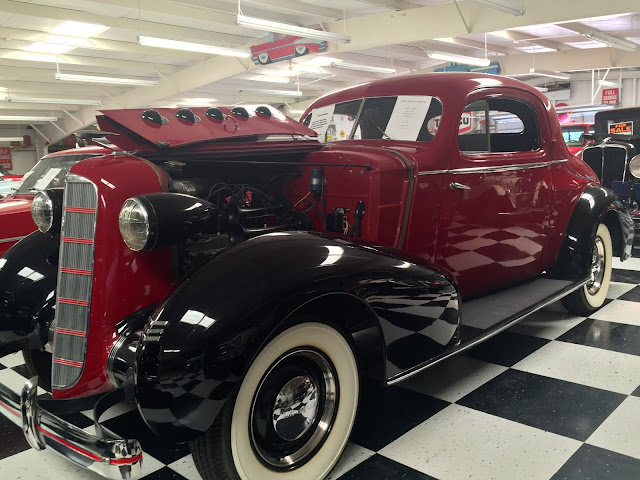 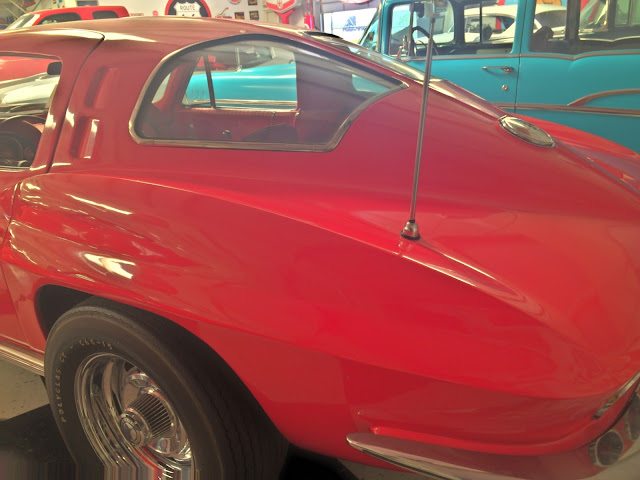 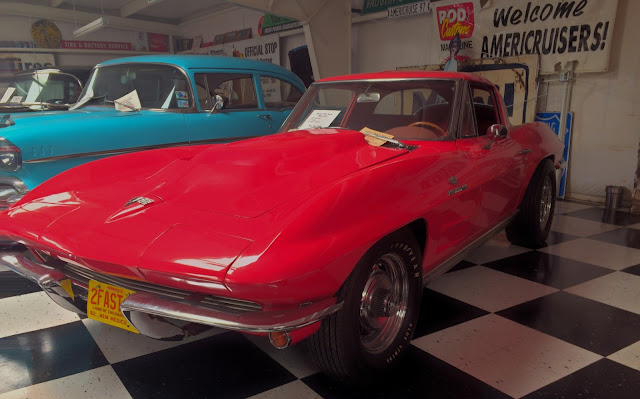 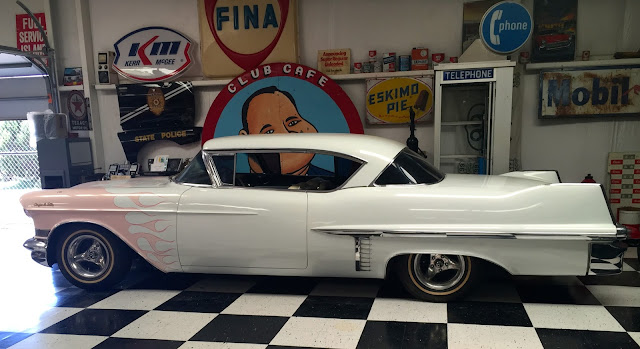 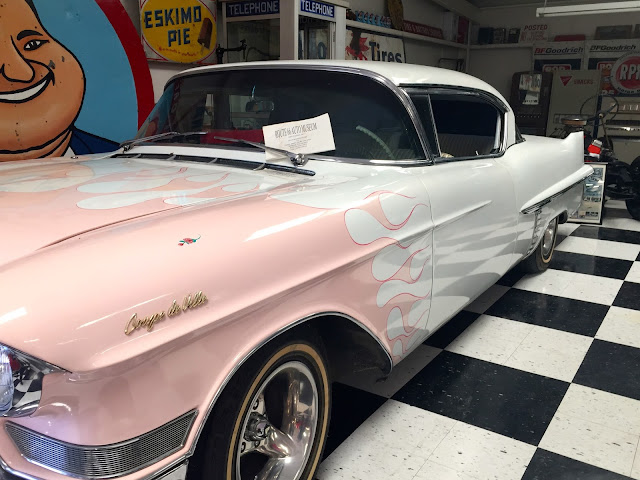 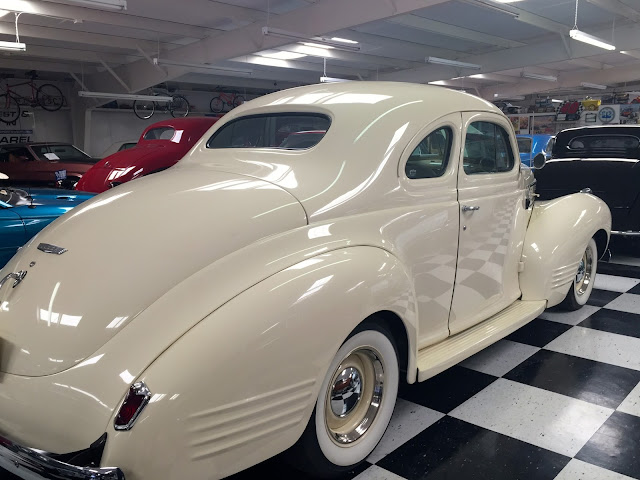 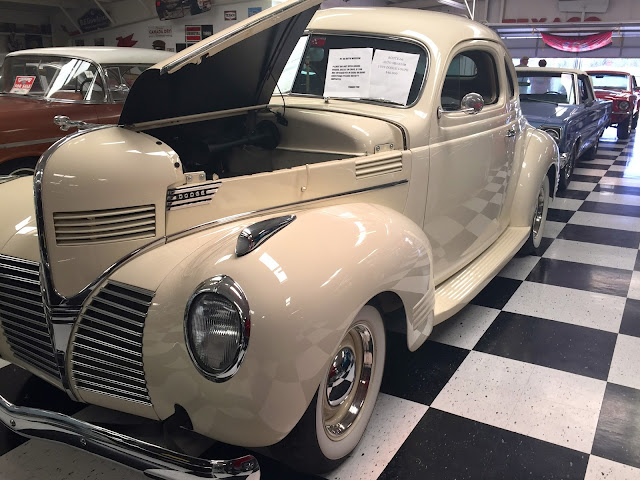 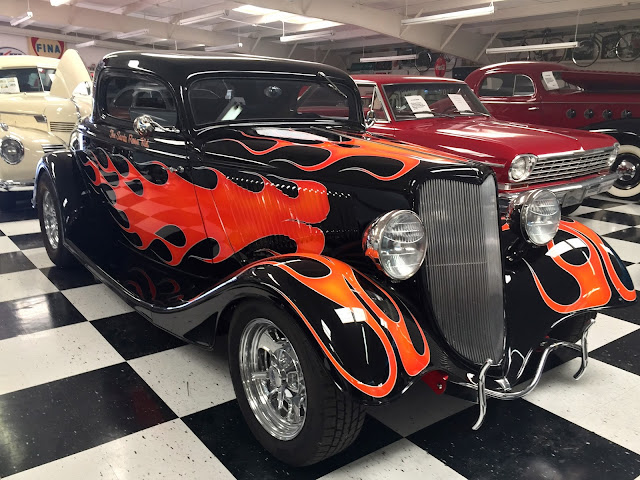 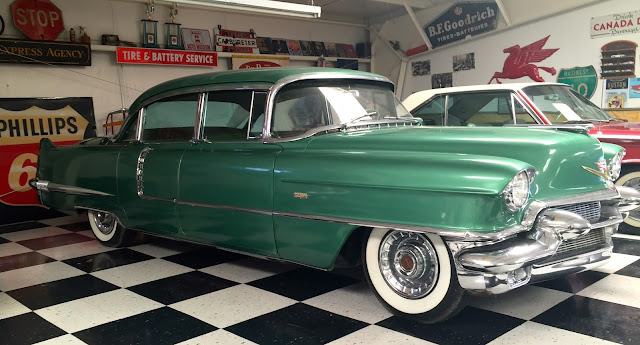 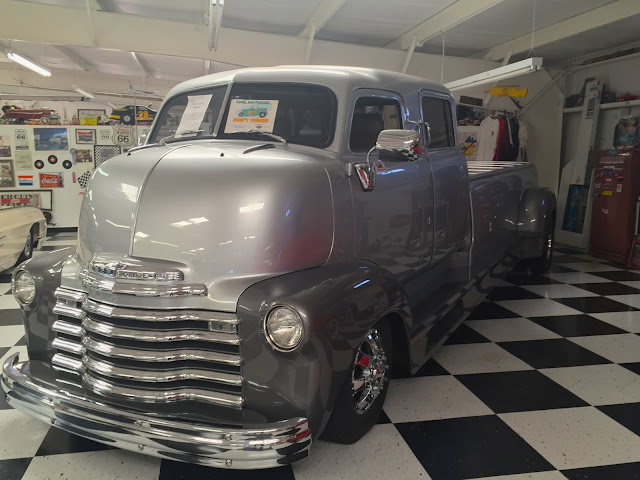 From Santa Rosa, it is a one-hour ride to Tucumcari and another iconic motel – the Blue Swallow Motel. I had stayed at the Blue Swallow five years ago. There are new owners now – Kevin and Nancy – and they are doing a splendid job of preserving the old tradition of 1930’s motels. They also have a rule that is very significant – in wine in plastic cups. They will supply you with proper wine glasses if you do not have your own. 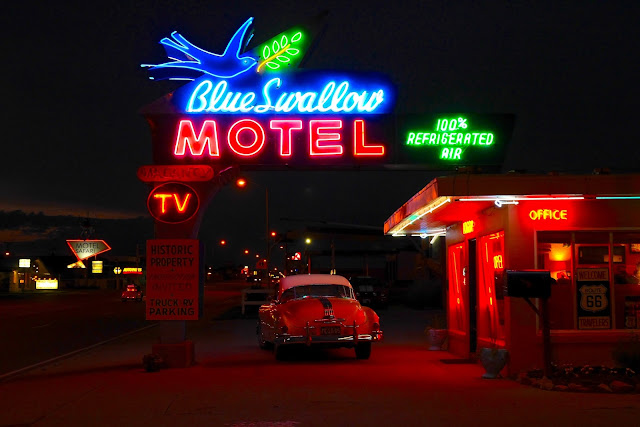 Dinner was at the Pow Wow Restaurant & Lizard Lounge – a fantastic Mexican Restaurant – plus they run a shuttle service from the motels.The booths all have murals that look like someone is already sitting in the booth. The people in the murals are all local people and are very life like. It's very strange to share a booth with people you don't know.