We left San Simeon around 8:30 to a typical California overcast morning. By San Luis Obispo (SLO) the grey sky had turned sunny and pleasant.

Pretty much dodged a bullet today.

Remember I mentioned my R1200GSA was cranking a little hard and I suspected the battery was going to go to hell in a hand basket soon. But the battery had tested good in the Scotts Valley Batteries Plus when I had them load test it.


Weelll, this morning at a gas stop in San Luis Obispo it wouldn't restart - Scheiße!


As luck would have it I had been talking to a guy at the gas station about his very cool '63 Matchless. He pushed down a small hill in the gas station. There was enough juice in the battery for the fuel pump and ignition and I was able to bump start it.


Then of all things I found a Batteries Plus store within five miles that was open on Sunday. They had a battery and I replaced the old one, which once again load tested OK. I did test the charging system and it's seems just fine. The battery was three years old, so who knows. Engine cranks over just fine now.


Next stop was breakfast at The Madonna Inn in SLO. This is a funny place, built by a wealthy building contractor for his wife. There are 110 rooms, each with a different goofy theme. The overall theme is sort of Bavarian like, and the color theme is a weird pink.


After breakfast we headed east over CA 166 to CA 33. CA 166 is not so interesting, but CA 33 is a nice twisty road up over the mountains and drops into Ojai (or as an old friend refers to it Oh Jeez Another Idiot), sort of an art community above Ventura.

From there we headed to Oxnard and to our hotel in a somewhat sketchy neighborhood. It actually was probably a just fine neighborhood; there was something that didn’t feel right about leaving the bikes out in the parking lot.


I came up with the genius idea of putting them in the room.


First I moved in Judith’s bike, which fit through the door with no problem.

Tis’ a scratch. Nothing but a flesh wound.

However, when it came to mine there was a different story. As I started to try to wiggle it through the door I smacked the right side auxiliary light into the door jam and promptly broke it off – it is plastic after all.


Plan B was to move the now wounded bike around in back, with the idea of an out of sight out of mind thing. Next thing was to tend to the busted light.

The magic of duct tap came through once again. In this case WD-40 was not required. 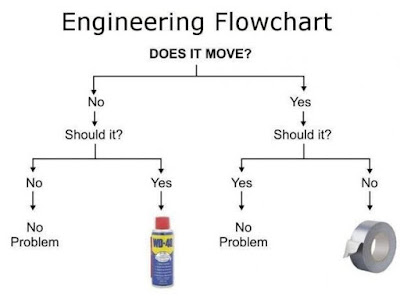