The First of A long Road Trip

The day after Christmas - most people are running off to the Shopping Mall to either exchange a gift or use a Gift Card.

Not us... we drove to Roseville, CA to buy two motorcycles. Now that I think about it, this is kind of like running off to the Shopping Mall, but we did not have anything to exchange or a Gift Card.

While searching the Web for some motorcycle dealers to visit during our Christmas Holiday in San Francisco I rediscovered A & S Motorcycles. They had a very good inventory of used motorcycles and I found two that would work great; a 2013 Triumph Street Triple and a 2012 BMW R1200GS Adventure, as well as a few others.

I called A & S and got a sales guy named David Morton on the phone and proceeded to explain our crazy idea. David is a great guy. We talked through the various details of how to go about buying, registering and insuring the bikes. David really helped with lots of details that we'd need to get past, and after 30 or 40 minutes we agreed that it is all possible and not that difficult.

Next we discussed the possible bikes. One of the BMW R1200GS bikes I was considering had been sold, but there was another that I had not seen on the Web site that David pointed out to me. This one was a keeper. Next we talked about the three Street Triples and narrowed it down to one with only 1300 miles.

David and his boss agreed to hold the bikes for a couple of weeks until we were in San Francisco and make the drive out to Roseville for the final inspection.

There was also the little hurdle to clear of storing the two bikes from December to the end of May when we'd be back. They also graciously agree to store them at no charge - another problem solved.

This was working out just perfect - and thus the reason for the day after Christmas road trip.

We arrived at A & S about 1:00 PM and found David. First thing, he gave us a tour of the Dealership. This is a large dealership selling BMW, Triumph, Ducati, Vespa and Eric Buell Racing. Each brand has it's own specific area for display and the associated accessories.

After the tour, we looked at the two bikes and determined that all is good with them. Next was discussing some details about a few things we wanted to add to the bikes. Then the ever painful part - the paperwork. We had agreed on the prices, so it was just off to the races to get the paperwork taken care. Actually this is like a slow race. The Calif. documentation is tedious at best, and it would have been worse if we were financing the bikes.

About an hour and a half later we had finished all the signatures and the copies were made.

Dave, thank you very much for making our crazy idea real easy. 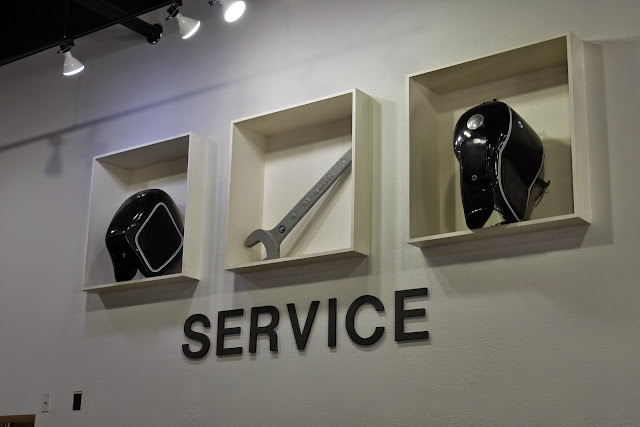 We headed back West to San Francisco, stopping in Tracy on the way to have a celebratory beer in a local brewery.

A Couple of Details

Well, you may ask: 1) How is it that I can register the bikes if I live in Germany now days, and 2) how the heck are we going to sell them at the end of the trip?

For the registration part it was easy. My youngest son lives in Vallejo and we registered the bikes to his address.

As for selling them, a very good friend in the Philadelphia area, David Harris, agreed that he will sell them for us once we finish. Dave is a seasoned buyer and seller of motorcycles, so he knows what and how to take care of this for us. This is a huge help - so a big thank you Dave. Plus Dave and his wife Mary Ellen are putting us for a few days once we get there.
Posted by Dennis O'Dell at 5/10/2015 02:10:00 PM