Heading out of Winslow the first stop on Route 66 was the Jackrabbit Trading Post, about half way between Winslow and Holbrook and just West of Joseph City.

There are “Here It Is” signs along I-40 and Rt. 66 for miles that tease you to stop. When I arrived it appeared that it was pretty run down and closed down. I never could figure out what was up, because if you search for it on Goggle there are posts that indicate it’s open. Anyway I had no time to wait around to see if it would open later in the day. 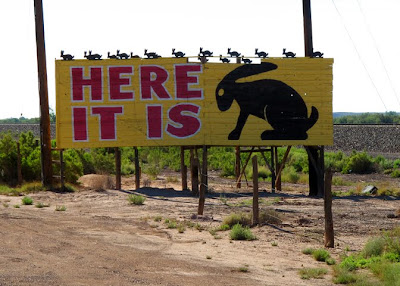 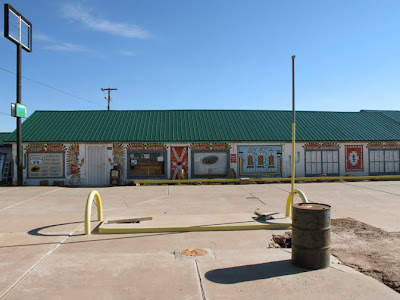 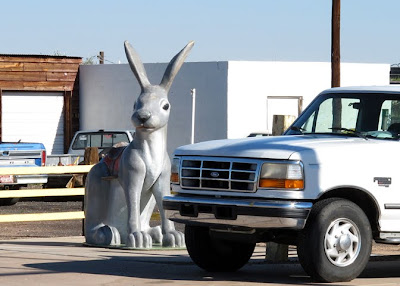 This poor jackrabbit was hiding behind the truck

Next planned stop was the Painted Desert and Petrified Forest National Park.

But, before getting there I rode through Holbrook, AZ and found the “Sleep In A Wigwam” motel. There were a number of these motel in the 1930’s, 1940‘s and 1950’s, but I believe there are only two left today - this one and one in San Bernardino, CA. Frank Redford is the brainchild behind the once popular Wigwam Motels. 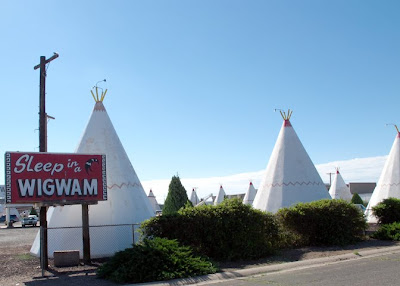 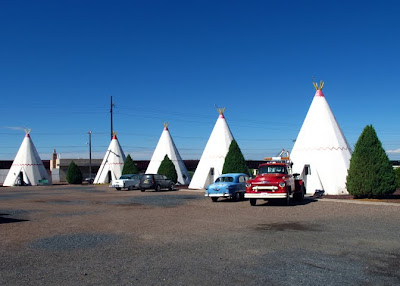 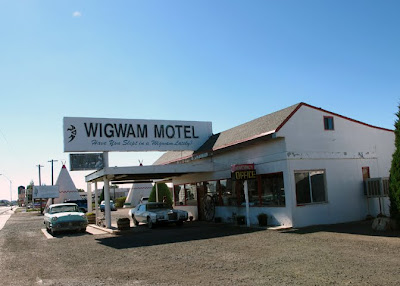 Not too far from the Wigwams is Joe and Aggie’s Cafe offering Mexican and American Food. Not having breakfast yet, I was hungry so I stopped in.

This was an interesting little cafe. I was greeted by a somewhat surly waitress and told to sit wherever. The cafe was also a gift shop and full of the typical stuff, including things from the animated movie "Cars". I thought this was a bit odd, until I remember that the story line of the movie has something to do with a trip on Route 66.

I saw more and more evidence of this as the ride progressed.

I ordered chorizzo and eggs, not having had any good chorizzo in a long time. If you’re not familiar with chorrizo it’s a pork sausage that is usually on the spicy side. It’s originally a Spanish sausage, but is very popular in Mexico and the Southwest. Joe and Aggie’s chorizzo was excellent. 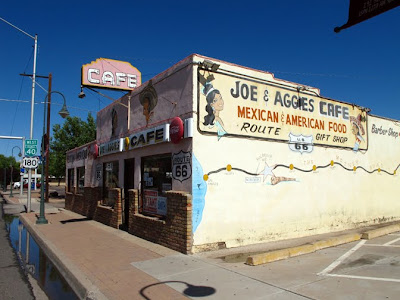 Full of chorizzo and eggs it is time to move onward to the Painted Desert. I only managed to visit the Painted Desert however, as taking the road South to the Petrified Forest would have put me way behind schedule. There’s no easy way to get back up North to I-40/Rt. 66 from that section of the park.

The Painted Desert is an easy and quick visit, and worth the stop. The landscape is made up of many layers of different colors that are visible due to erosion. The desert is like a rainbow with the broad range of colors. I’m afraid my pictures don't do it justice. The visitor Center was built during the 1930’s and has recently been restored.

The map shows a long section of Old Route 66 running through the park. I was planning to ride this section, but found out that it is closed to the public and is a service road for the Park Service and State of Arizona. 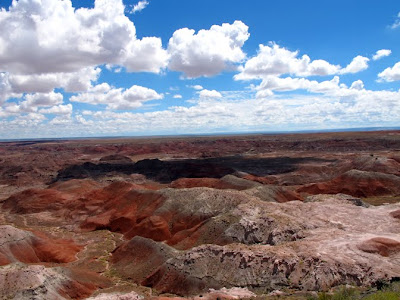 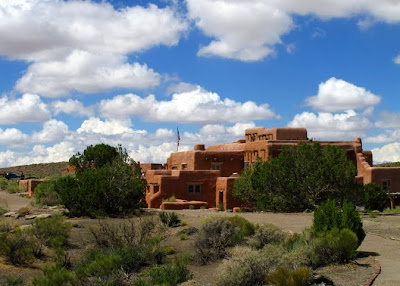 The next leg was a long and pretty much uneventful grind on to Albuquerque. When I crossed into New Mexico I ran into a some thunderstorms that made for dramatic skies. 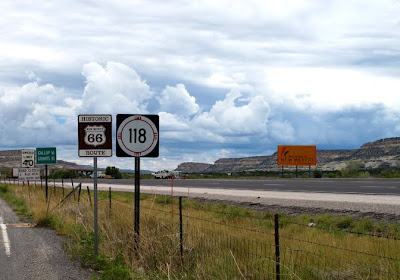 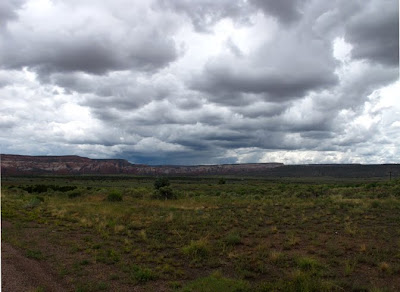 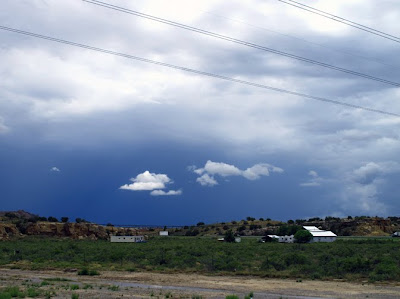 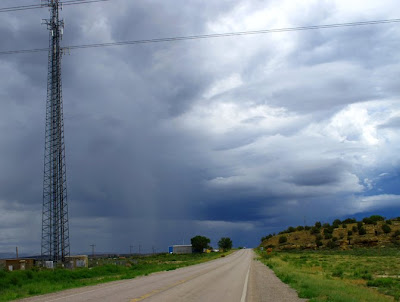 Albuquerque has a colorful Route 66 (Central Ave.) marquee over the street as you enter town

Unfortunately it was the beginning of rush hour and Route 66 takes you right through the heart of Albuquerque and it was hot and muggy.

“The Daily Lobo, which is the University of New Mexico’s independent student newspaper, has published a well-done article about the historic Aztec Motel on Central Avenue (Route 66) in Albuquerque.

The place was down in the dumps until the early 1990s, when Mohamed Natha purchased and fixed up the building. (He’s yet another Asian-American who’s helped save Route 66 properties, but I digress.) That’s also the period when a woman decorated the building in a memorable fashion, which remains to this day.

The Aztec is now owned by Matthew Terry, who purchased it last year. He wouldn’t tell the Daily Lobo his future plans for the motel. But I talked to him some months ago on the phone about another property on Route 66. Let’s just say that he told me that he’s committed to preserving certain historic properties on Route 66, and I’m confident he’ll do right with the Aztec.

Alas, unless you’re really persuasive, the Aztec is available only for long-term renters:

“It really doesn’t function as a motel,” Terry said. “There are many issues with crime and drug use that are associated with Central Avenue. We think that nightly stays would expose us to that potential risk.”

So, needless to say this is a seedy part of town. 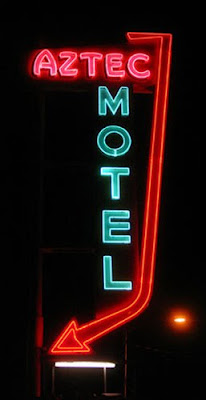 This picture is courtesy of the Route 66 News web site 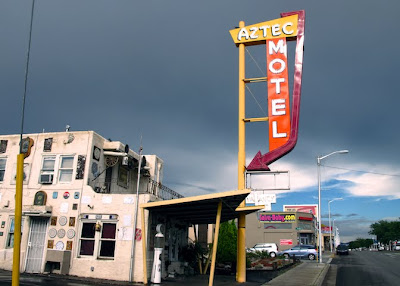 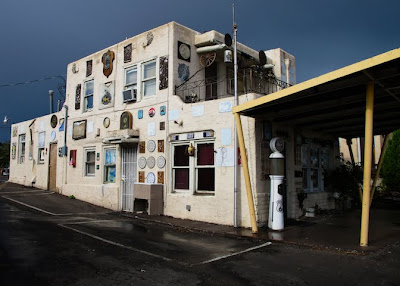 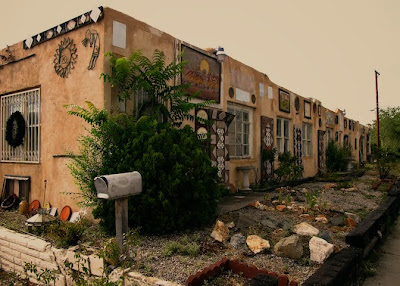 Having seen the Aztec I continued to move on towards Tucumcari, NM and the Blue Swallow Motel.

Before getting to Tucumcari I stopped at Santa Rosa, NM to call the Blue Swallow, as it looked like I was going to be pretty late getting in. Santa Rosa is about 60 miles from Tucumcari. Also, there is a “Ghost Town” named Cuervo just past Santa Rosa and I had planned to stop to see it and then take Old Route 66 the remainder of the way to Tucumcari.

I pulled into an old Shell Gas Station that is now a garage, complete with all manner of cars in various stages of repair parked in front.

While I was making my call to the Bill at the Blue Swallow I noticed people leaving the Shell Station/Garage - presumably going home. I heard a Harley start up and next thing there is a guy on a Harley sitting next to me. As I got off the phone he asked me how I was doing in a very Cheech Marin (you remember Cheech and Chong - “Dave? Dave’s not here”) accent. Well I ended up talking to this guy (I completely forgot to ask his name) for nearly an hour. Now the sun is going down and I’m still 60 miles away from Tucumcari.

I asked him about Cuervo and he said, “forget it mahn- dre’s nutin’ der” (OK- I don't know how to write a Cheech accent). Turns out it’s not much of a ghost town, only about six abandoned buildings, and Route 66 is washed out just past the town, with a “big-ass arroyo” going right across it.

So, I said good bye to my un-named benefactor and headed to Tucumcari. I did see Cuervo from I-40 and it looked a little spooky in the evening light. 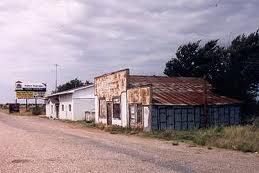 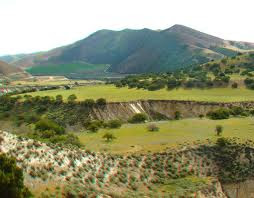 Example of an arroyo

Pics from the web

I arrived in Tucumcari at 9:00 PM and could not find a place to eat, so I ended up in a Circle K and bought prepackaged crackers and cheese.

The Blue Swallow is a vintage Route 66 motel that has been restored. Bill kept the light on for me and I got a picture of their famous neon. 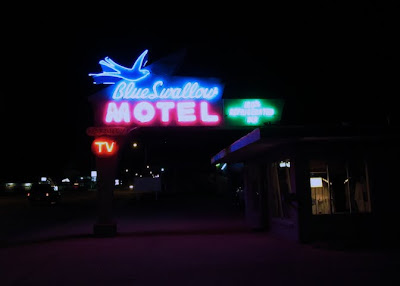 A little about the Blue Swallow from the web (http://blueswallowmotel.com/):

“The Blue Swallow Motel was built in 1939 by W. A. Huggins. It features a unique, personal shell design on the exterior stucco. Garages, a signature of motor courts of the era, are another unique characteristic of this motel. According to Huggins' son, Phares, it was sold at a loss because of economic conditions at the onset of WWII. With gas and tire rationing in effect, people weren't traveling as much.

The best known proprietor of the Blue Swallow was Lillian Redman, who acquired it in 1958. She operated the motel for almost 40 years, but faced numerous difficulties including the interstate bypass, which drastically reduced her customer base. There is much information available about Lillian online and in numerous publications.

Your hosts, Terri & Bill, purchased the Blue Swallow Motel in 2004. They are keeping the tradition of hospitality alive and welcome you to this historic Route 66 landmark.” 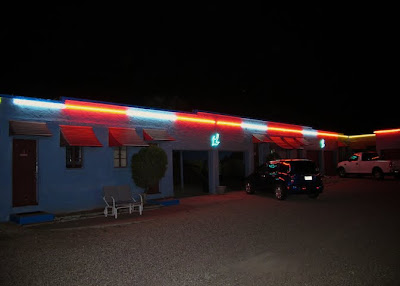 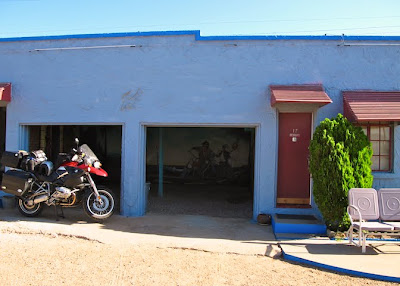 My room is # 12. It comes with a garage.
Notice the mural on the back wall of the garage. 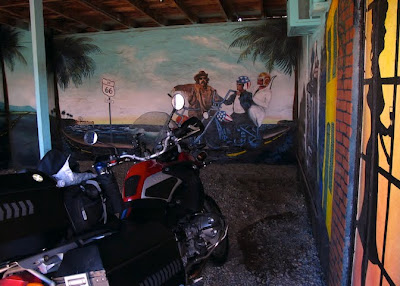 Here's the mural on the garage wall - it was too funny.

The room was simple, but clean and comfortable, plus they have free Wi-Fi.

Tomorrow is Bethany, OK, near OK City and that proves to be a real hoot.