Bethany, OK to Rolla, Mo is another long day – 425 miles. I made it to the hotel at 8:30 – thus the reason for the delayed blog account of the day’s journey. The temperature was high all day. Most of the afternoon was about 92° F. This isn’t too bad while you’re moving, but today the humidity really came up and it was sticky and tiring.

It was so hot and humid the even the cows were hangin’ in the shade.


I rode through three states today – OK, KS and MO – of course Route 66 is only 13 miles long in Kansas. 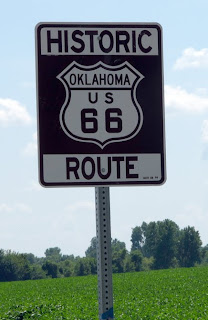 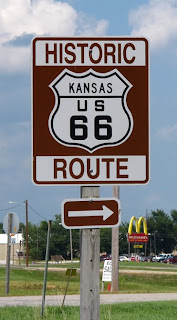 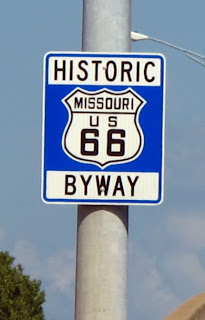 There were not many interesting sights on this leg, but I’ll tell what I can.
Not too far from Bethany is the town of Stroud, OK, where there is supposed to be a historic Phillips Gas Station – not there as far as I can tell. It’s now a modern gas station/convenience store. However, right across the street is the Rock Café.
The most notable restaurant in Stroud is the Rock Cafe, built from rocks removed during the construction of Route 66. A fire gutted the restaurant in 2008; it has since been rebuilt and is now open for business once more.
Dawn Welsh owns the Rock Café and was apparently the inspiration for Sally Carrera, the blue Porsche in the movie Cars.


I stopped in for a cup of coffee. One interesting thing in the Café is the bathroom. Even square inch of the walls are covered with graffiti.

It’s a pretty long ride to the next point of interest – the Eisler Brothers Old Riverton Store in Riverton, KS. There wasn’t really too much here unfortunately – a small general store,


The store has been operating along Historic Route 66 since before the Route officially opened. Leo Williams built it in 1925 and he operated the market as Williams Store until 1973 when Joe and Isabell Eisler purchased the business.


I poked around, but didn’t really see anything of much interest, but I contributed to the local economy and bought some refrigerator magnets.


Next it was on to Missouri - pretty uneventful and not too much to see. I stopped at the Munger Moss Motel in Lebanon, MO, a nicely renovated old motel. Nevertheless, I guess unless you stay there it’s not much to write about.


From Lebanon I pressed on to Rolla and the Holiday Inn Express to rest up for tomorrow.

Today was bittersweet.  I was getting close to home, but the Big Trip was almost over.  I knew the last three days would be a little anti-climatic after all of the great sights heading West and then back.  But all good things come to an end.
Posted by Dennis O'Dell at 8/24/2010 10:35:00 PM