We got a little bit of an earlier start today and headed to the Cherohala Skyway.

Cherohala Skyway winds its way between Tellico Plains, TN and Robbinsville, NC for 43 miles, and is designated a National Scenic Byway.

It is a beautiful road for a motorcycle ride; elevation change, twists and turns, good surface and very scenic. The speed limit is 45 MPH, but it begs to be ridden faster. Competent riders can safely ride it at 15 to 20 MPH faster without putting themselves in any danger. Riding faster than that starts to push it some unless you are pretty good. Unfortunately, there are many folks who either think they are competent or pretty good and find out that they aren’t so much…

We enjoyed the ride greatly and I won’t mention how we respected or did not respect the speed limit. Best road since Angeles Crest Highway. 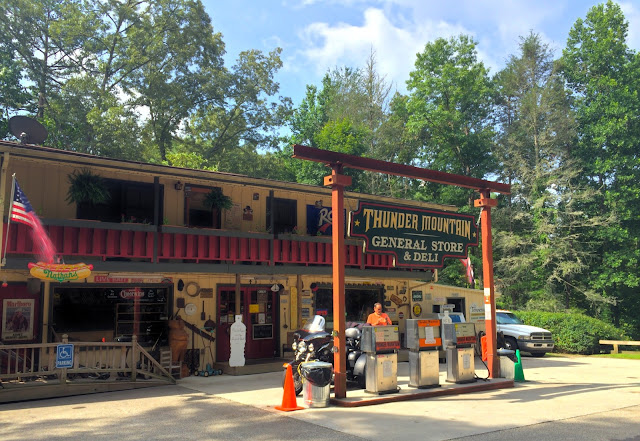 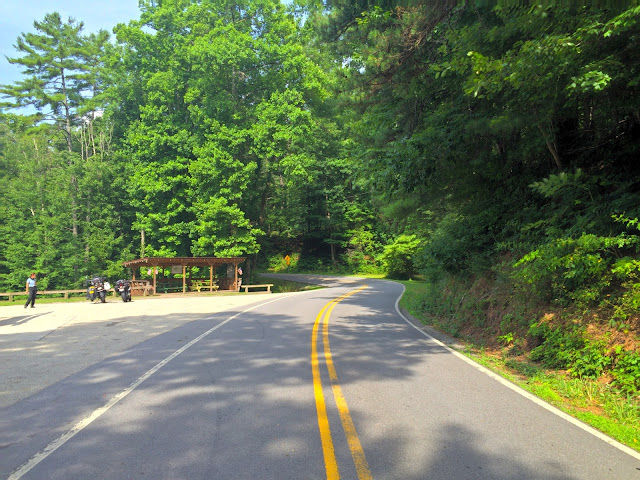 After reaching Robbinsville we continued east to the Blue Ridge Parkway and picked it up at the Southern Terminus.

People will argue over what the best motorcycling roads are in the U.S., but the BRP will always be in the top 3 in my opinion. There are roads with better and more challenging turns, none come to mind that offer so much for so many miles. Not to mention, there are countless quality motorcycling roads that cross the BRP in case you get bored. 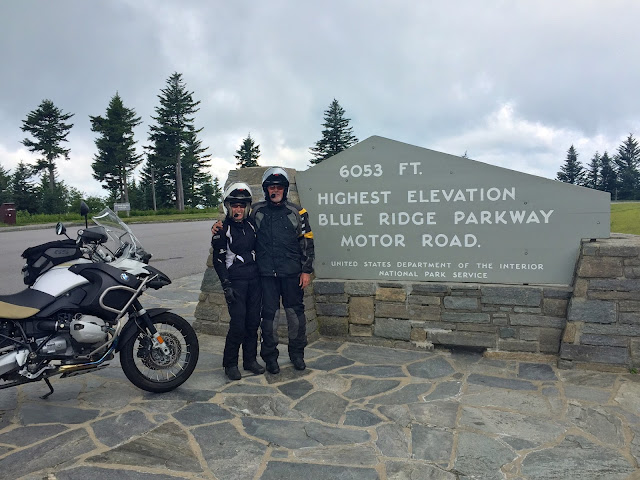 We rode north towards Waynesville, which is off of the BRP a few miles. Judith was running a little low on gas, so we decided to take a diversion off of the BRP to get gas. I completely confused myself when choosing a place to go for gas (there are no gas stations on the BRP – you need to get off and head to a town somewhere). There are two different roads that you would ordinarily use to get to Waynesville from the BRP. I inverted north for south in my feeble mind. This caused me to head to a town called Brevard, about 20 miles off of the BRP and down a pretty twisty road (that I recalled riding and hating as soon as I started down it this time as well) and got stuck behind a parade of slow cars. The return trip back up to the BRP went much better, with only a small parade. Thus Judith got her first taste of technical roads in the Appalachian Mountains, albeit pretty slow.

So, after the petrol diversion we beat feet to Waynesville and the Oak Park Inn. I had stayed in this motel six or seven years ago, and didn’t realize I booked it again. When we pulled up I laughed out loud. 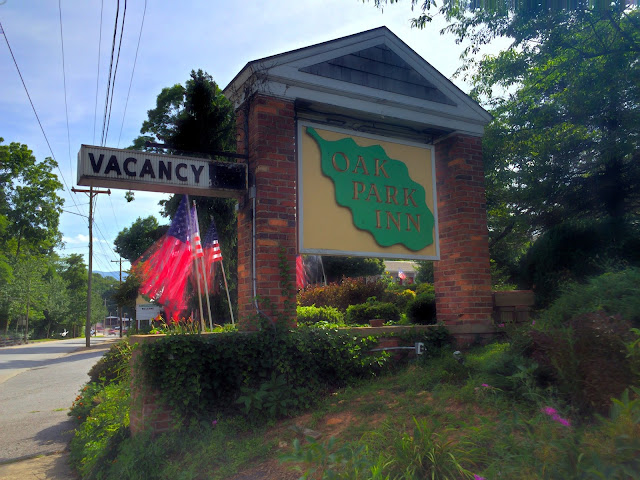 It is an older, but well maintained motel, with a lot of character.

After getting checked in and settled we walked up the street and bought some beer and wine and then sat and relaxed for a bit. 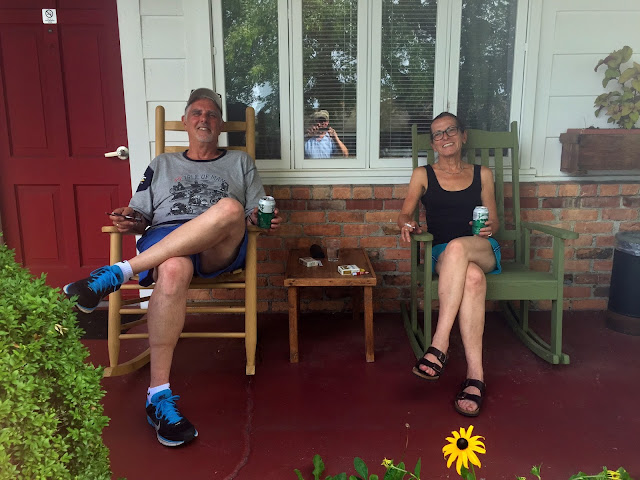 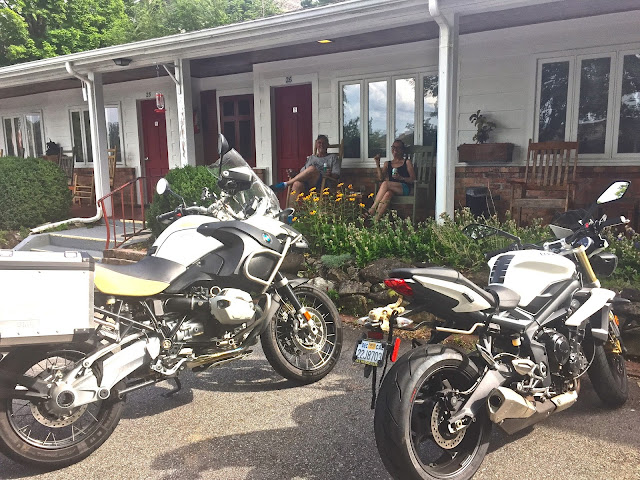 A little later we walked a block to dinner, and when we returned we found that a couple of the guests played guitar, mandolin and harmonica. We ended up sitting with them and several other guests, along with motel owners listening to music. A real nice end to a real nice day.

There was a pretty good rain and more mountain style thunderstorms for most of the day today, so I took the time to catch up on this blog.

Later in the afternoon the storm broke and we took a walk into town. We got back just before the next storm came rolling through.

Timing… They say it’s all about timing!

They are closed on Tuesday and Wednesday – today is Wednesday. 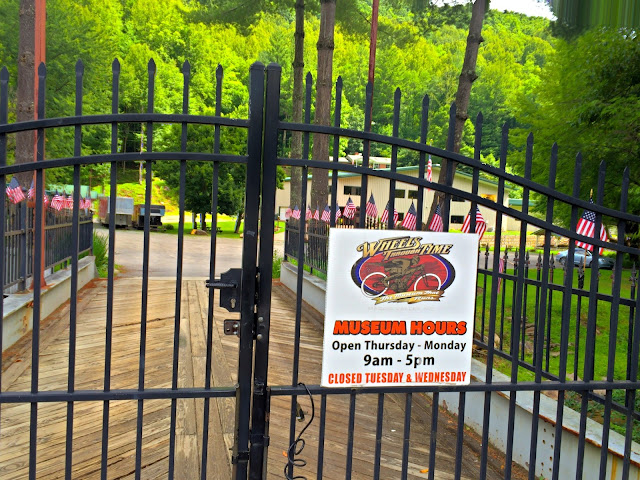 We drowned our sorrows in Pink Lemonade at the Salty Dog just down the road from WTT. 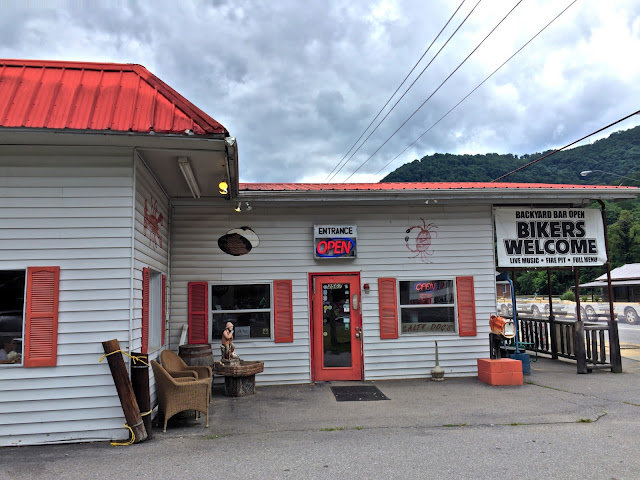 After knocking back some lemonade we took a short ride that looped back to the hotel and I took a nap.

When I got up I found a German flag flying in front of the room. The owner put it up to celebrate his international visitors. Actually, there is an International Fest in town this coming weekend and the hotel owners are getting ready by putting up flags of different nations. 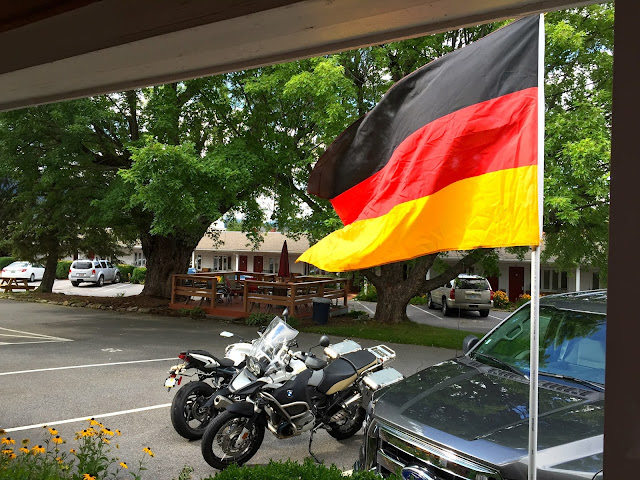