At 7:30 we headed off to Meadows of Dan and the Poor Farmer’s Market for breakfast.

Once we were all satisfied and reinvigorated we headed out to enjoy Jim’s Invisible Roads. We used the BRP as our not so invisible road to get to the really good stuff.

After leaving the BRP we wound around all throughout the Blue Ridge Plateau area on roads with big sweeping turns to narrow tight and technical twisty turns.

Judith had been a little concerned that she would be the slowest and weakest rider of the group, but her concern was for not. She was right there with all of us and over the day her skill through corners was greatly improved. She got a bunch of compliments from everyone.

Jim was also kind enough to provide some of his secret sauce riding tips to Judith, even though this was not a real workshop.

At some point we encountered a bit of rain, but not enough to cause too much concern. The sun came out later and we all dried off pretty fast.

Here are a few of our stops... 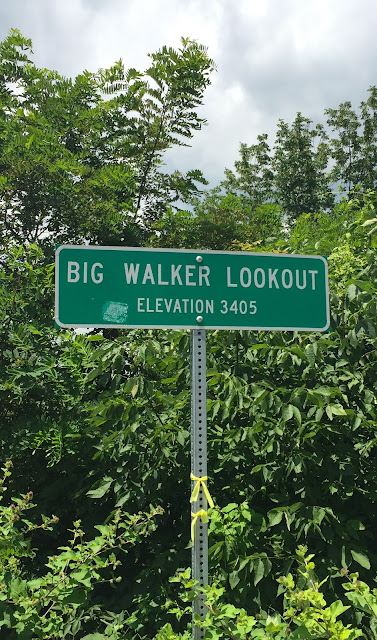 We cleaned up and had a session at the Red Chair Society before going to Mickey G's Bistro & Pizzeria, a wonderful Italian restaurant in Floyd.

Breakfast was in a different spot today and I have forgotten the name and no pictures.

We took the same approach today as we did yesterday – BRP to the good stuff.

More new and great roads once again…
At one point we were on highway 58 (a road where I had crashed a few years ago), going up the hill through a series of very tight switchbacks, when the heavens opened up. After a small bit of thought we turned back down the hill and through the same switchbacks in a pretty heavy rain.

However, at the turnaround point Judith suffered a small incident. Actually it was not a big deal, but rather a Laugh In kind of tip over when she went to put her foot down on a sloping side of the road and the slop was a little too much – so she found nothing but air. This popped the left side mirror off and broke the tip of the clutch lever. No damage to Judith however (other than her pride), so that was good.

Once back at the bottom of the hill the rain stopped and we stopped for lunch and to dry out our gear.

After lunch I “MacGyvered” the mirror back on to Judith’s bike, so all was good and off we went for more fun. Judith’s tip over didn’t faze her in the least and she was still improving through the twisty roads. We even had a half mile or so of gravel road she conquered.


At the end of second 225-mile day we repeated our ritual of unwinding at the Red Chair Society. Then one more go to the Pine Tavern Restaurant for unbelievably good Southern food.
Posted by Dennis O'Dell at 7/27/2015 06:59:00 PM