In view of the fact that Navarro was closed yesterday I waited until they were open before leaving for San Carlos. I picked p two bottles of wine, strapped the box on the bike and headed to Mountain View Road that will take me over to the Coast Highway. 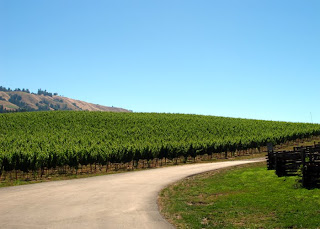 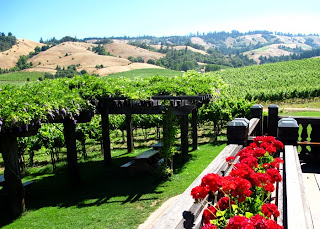 Nice Picnic Area Behind the Tasting Room
Mountain View Road is 28 miles and winds around like a snake have contortions. There is an occasional logging truck coming from the other direction to make it more exciting. It was a slow and cautious ride.
Once I made it to the Coast Highway I headed South into the fog (again). I made a quick stop at the Point Arena Lighthouse. The original lighthouse is not functional any longer to the 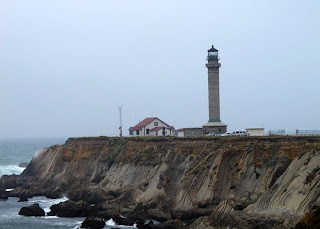 extent that the original light projects the warning light. The lighthouse is now the host for a modern light that incorporates the 1st Order Fresnel lens principles for the efficient projection of light. A bell buoy replaced the fog horn more than thirty years ago.
By the way, the lighthouse’s 1st Order Fresnel Lens is over six feet in diameter, weighing in at more than six tons. The lens is made up of 666 hand-ground glass prisms all focused toward three sets of double bulls eyes. It is these bulls eyes that gave the Point Arena Lighthouse its unique "light signature" of two flashes every six seconds. This incredible optic, that holds an appraised value of over $3.5 million, is set in solid brass framework, was built in France.
The reminder of the ride down the Coast was pleasant enough. Very little traffic and the fog burned off.
A little ways past the Point Arena Lighthouse is the town with the un-pronounceable name - or at least it's pronounced many different ways.

Can you pronounce this town's name? 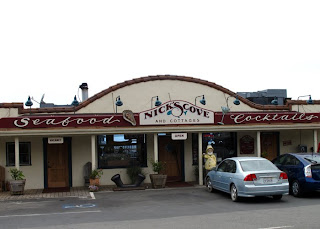 Close to the little town of Marshall, on Tomales Bay, I stopped at Nick Cove for BBQ’d oysters. The oysters come right out of Tomales Bay and Nick’s uses a tasty BBQ’d sauce on the oysters. Nick’s Cove is an old place with a lot of character. The bar was in a scene from the movie “Bandits” with Bruce Willis and Billy Bob Thornton a few years ago.
Nick's Cove 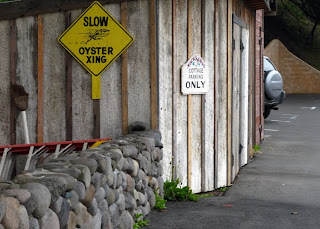 Oysters do not cross very fast

Tomales Bay is right behind Nick's Cove
After leaving Nick’s Cove I was approaching more densely populated real world and the traffic picked up. I eventually worked my way over to U.S. 101 and across the Golden Gate Bridge and then through the middle of San Francisco at rush hour (great timing).
I finally got to Russ and Debbi’s house in San Carlos about 6:00 PM and happy to be out of the traffic.
Posted by Dennis O'Dell at 7/22/2010 03:52:00 PM