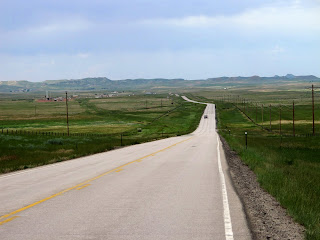 Today wasn't going to be much about riding great back roads, but more about getting from Rapid City to Sheridan, WY.After leaving Rapid City I decided to stop in Sturgis to see the Motorcycle Museum, but like the rest of the town it was shut down. So I headed to the Devils Tower in Wyoming next.


Once again, you see the sight from the road (like Crazy Horse) and I wasn’t that interested go into the park and go on a hike (didn’t bring my hiking gear). Took some pictures and headed West again. 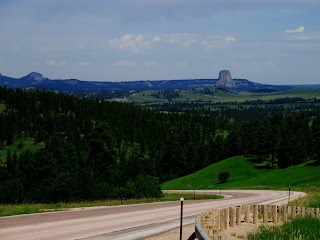 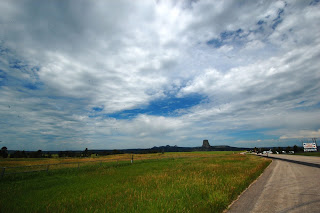 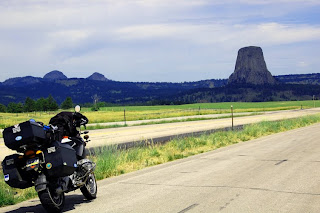 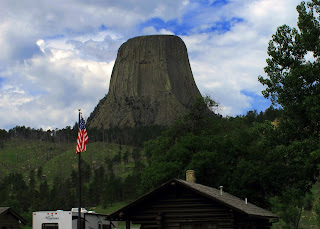 When I pulled into Gillette, WY to get some gas and take a short break I spotted two guys on BMW motorcycles that were loaded down like me. I thought I’d strike up a conversation with a fellow BMW Motorrad traveler. I walked over and said, “Hi, where you headed?” One guy didn’t say a word and the other guy (Mr. Macho – 6’5” with a monster handle bar mustache) just growled “West”. I asked where West and Mr. Macho growled, “I don’t know, just West.” I mentioned I was also headed West to for the BMW MOA in Redmond. Mr. Macho growled back once again, “Yeah, we’ll probably get there – sometime or another”, walked away and mutter something about being from Alaska.
I figured out he really wasn’t interested in talking so I hopped on the bike and left. For the next couple of hours I kept thinking “what a jerk”. Then I thought, “Well maybe he hit his threshold and needed to run to the head, so no time to talk”.
It was still kind of troubled since one of the great things about a road trip on a motorcycle is talking to people you run into on the way to wherever you’re heading. So far that hadn’t been a problem up until meeting Mr. Macho, but I was getting worried that this was a sign I was going to run into jerks for the rest of the trip. Not to worry however… Next gas stop I ran into two Harley guys – real Harley guys in the old school sense. They were wearing colors from a one-percenter club and there were other telltale signs that these were not from the same part of society I’d normally be involved with. Funny thing was they were really friendly. They knew the good back roads really well and gave me a bunch of hints on which roads to take for the remainder of my journey to Sheridan.
Then it got even better when I got to Sheridan.
There was a bunch of guys who were in a golf tournament in the hotel bar. The tournament was over and I guess the way you celebrate the end of the tournament is to get really drunk and argue about missed shots. This was all pretty funny. I moved outside to keep out of the line of fire.
After moving outside I met a young French guy who is an investment banker in NYC. He was on a rented Harley and riding around the region for a vacation. He was pretty interesting to talk to. A couple of the drunken golfers decided to move outside as well and joined the French guy and me. These two were not as much into the celebration as the other golfers, so it was safe with them – sort of. A few of their buddies came out to harass them, along with an Oglala Sioux Indian named Ronnie. There’s a real Indian name for you.
Ronnie wasn’t drunk and he had some good stories about the time he spent as a police officer with the Bureau of Indian Affairs. Ronnie was at the Wounded Knee incident in 1973 – not a bright spot in the history between Native Americans and the U.S. Government (http://en.wikipedia.org/wiki/American_Indian_Movement).
Last to join this group was Richard and Michael. Michael was Richard’s son-in-law and they were in town to go on a 50 mile cattle drive. Both were from Gatlinburg, TN. Richard was a hoot. He was a real cowboy with some very funny stories and jokes – kind of like the Robert Duval character Gus in Lonesome Dove.
Michael the son-in-law had never ridden a horse, but he had some cowboy boots and a new cowboy hat, which he wore backwards, a supply of Gold Bond Powder and Destin cream for baby rash. I never did figure out if Richard liked his son-in-law or not.
The drunken golfers decided to go into town, which was my cue to go back to my room.
Next day off to Jackson, WY with my faith restored in the road trip concept of meeting and talking to people you otherwise would never encounter.
Posted by Dennis O'Dell at 7/12/2010 10:42:00 PM