Today was a day of extremes and a couple pretty magnificent natural and man made spectacles.
Stats for the day:
Elevation Change
Highest point: 5400 feet above sea level
Lowest point: 282 feet below sea level
Temperature variations throughout the day
Lone Pine @ 5:30 AM: 67° F
Stovepipe Wells Death Valley @ 8:00 AM: 103° F
Furnace Creek Death Valley @ 8:30 AM: 108° F
Hoover Dam @ 1:00 PM: 113° F
Hoover Dam @ 3:00 PM: 116° F
I was very happy once again to have the Swamp Cooler Vest…
I got an early start and left Lone Pine at 5:30 (OK, I was trying to leave at 5:00). From Lone Pine I turned East on CA 136 and then on to CA 190, which crosses Death Valley. Leaving early morning is a good idea to beat some of the heat, but when you’re going West to East the Sun is in your eyes for an hour or so.
The temperature was cool and didn’t get above mid 70s – but not for long. As soon as I went over the two passes that are before entering Death Valley the temperature shot up.
Death Valley deserves its name. It is foreboding. The National Park Service web site starts out by saying “Hottest, Driest, Lowest”.
First, you have to go over two passes – both of them are narrow and tight twisting routes. The landscape is so different and desolate it’s hard to keep your eyes on the road, but I sure didn’t want to run off the road because the drop-offs are pretty hairy.
Finally there is a long decent into Death Valley proper, giving me a long look at what I was heading to.
I stopped at Stovepipe Wells to get gas and more water. It was already hotter than hell and I still had more than 40 miles before I’d actually exit Death Valley. The heat doesn’t go away when you leave the park either. The temperature at Furnace Creek was 108° F and it was only 8:30 in the morning.
After making it through Death Valley without running out of gas and water I headed towards Hoover Dam. U.S. 95 heads to Las Vegas, but I took a side trip on NV 160 to the town of Pahrump to get breakfast at the Pahrump Café. After filling up on a Pahrump Skillet (a bunch of eggs, cheese and potatoes) and re-watering the Swamp Cooler in the bathroom, I got back on the road to Hoover Dam. NV 160 took me to Interstate 215 and right past Sin City (Las Vegas), but I kept on going. 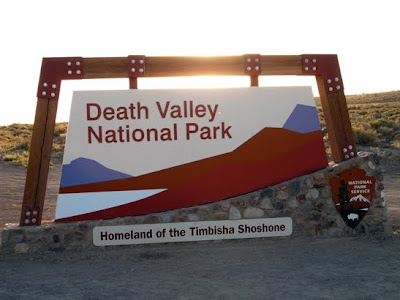 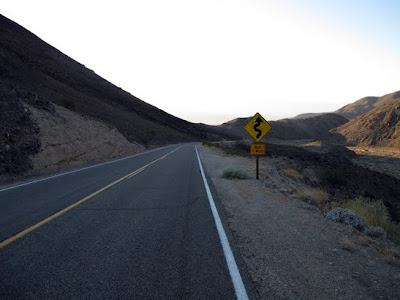 This Road Sign is an Understament of the Turns 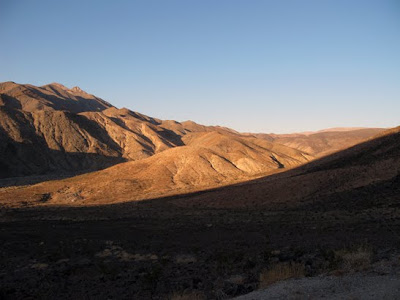 Landscape on the way over the First Pass 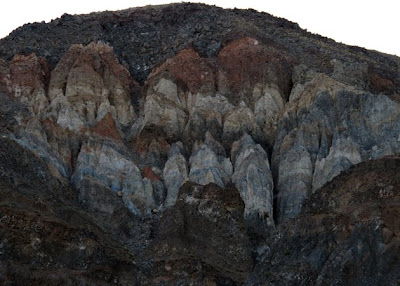 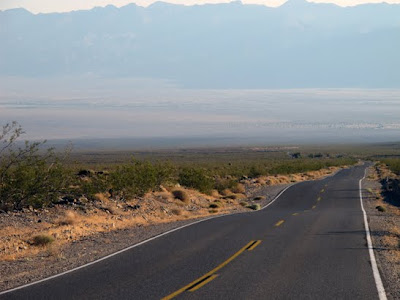 The Grade Dropping into the Valley 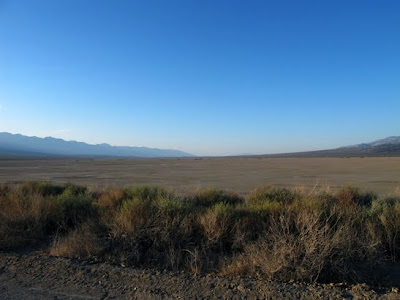 Down on the Valley Floor 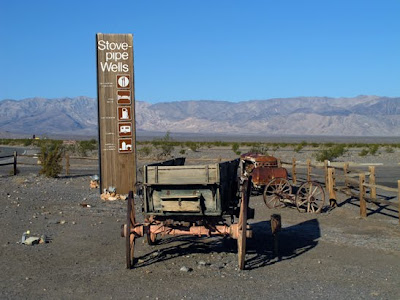 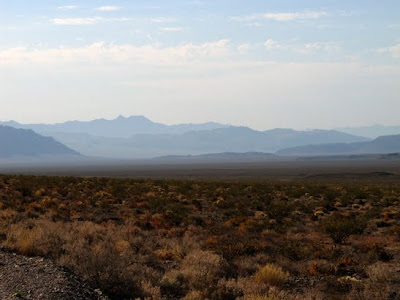 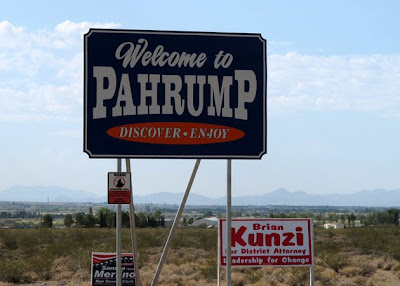 No Caption needed
From I-215 the turn off is NV 93 towards Boulder City. About 5 or 6 miles from the Dam the traffic came to a crawl.
It was about 106° F and the Swamp Cooler was drying out, so I pulled into a gas station for gas, water and used the hose to recharge the vest. I re-joined the crawling parade to Hoover Dam and in about a half hour got to the dam.
Somehow I managed to walk from one end of the dam to the other and back again without passing out from the heat. It’s been about forty years since I have been to Hoover and there has been a lot of updating. There is a very nice visitor center now.
In addition, there is a new bridge that spans the chasm the Colorado River flows through just past Hoover Dam. The Hoover Dam Bypass is a huge project and is almost completed. I understand it opens in November. Take a look at this web site for more info – it is impressive. http://www.hooverdambypass.org/Const_PhotoAlbum.htm 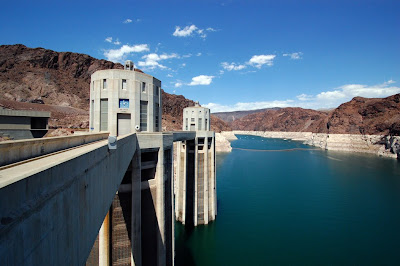 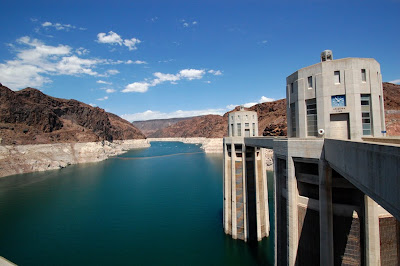 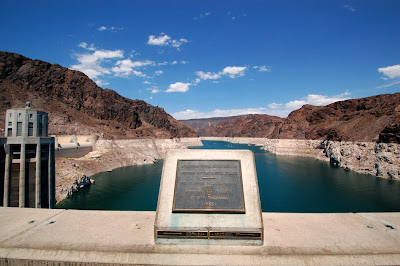 Marker at the Nevada and Arizona State Line 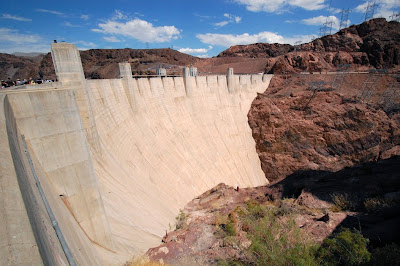 Colarado River Side of the Dam 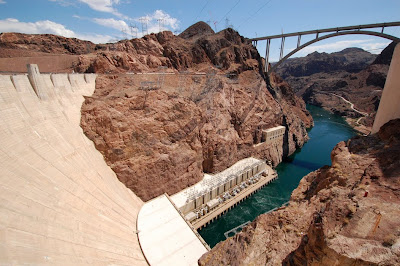 River Side and new Bypass Bridge 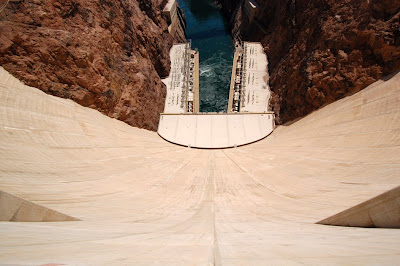 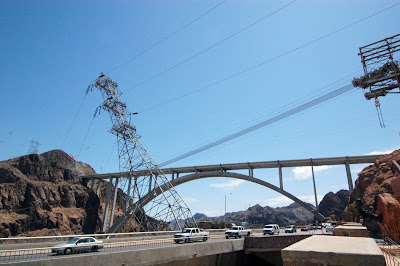 Traffic Crossing the Dam and New Bypass that will take most of this traffic. The Power Cable Tower isn't falling. It is supposed to be that way (I don't know why) 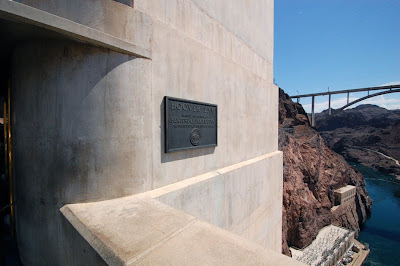 After leaving Hoover Dam the traffic was at a crawl again for about 15 miles through the construction zone for the new highway for the bypass – two lanes – slow RVs and Trailers – no passing possible. I finally got to the end of the construction zone and the highway opened up, so I beat feet for Kingman.
I arrived in Kingman at 4:15 – earliest arrival yet. After settling in to my room and cleaning up I had a delicious dinner of grilled red snapper in Oyster’s, a Mexican restraint a block away.
A good end to a brilliant, but very hot day…
BTW, there was a small malfunction with the Spot device yesterday (the bread crumb tracking shut off around Angles Camp, because I forgot to rest it), so if you are following the bread crumbs there is a gap on Day 20.
Posted by Dennis O'Dell at 7/25/2010 06:45:00 AM