Note to self #1… when you start out on a long road trip and the battery is three years old – get a new one before leaving.


The plans was to get up early, grab a coffee, load up the bike and leave by 7:30, and then stop for gas and breakfast about an hour down the road.


I got the coffee, loaded the bike by 7:15, turned the key on, hit the starter and nothing. No lights, no engine crank over, no zaroom, zaroom.

The battery was dead as a door nail. Crap, now what? Fortunately, the hotel engineer took pity on me and drove me to a battery shop where I picked up a new battery. Now changing the battery on a BMW R1200 is a pretty easy job – 30 minutes tops – if you don’t have a bunch of accessory electrical stuff connected to a fuse bus. It took about four hours to get the new battery, disconnect all the extra electrical stuff, install the battery and get it all back in working order.
After everything was re-packed I was on the road at 11:30 – so much for the “plan”. Stopped for gas and a bite to eat just five miles down the road.


Note to self #2… if you go into a Subway, and there is a group of six adolescent children, and a clueless mom in front of you, be prepared to wait or go to Taco Bell.


OK lunch finished, it’s now 12:30 and Sioux Falls is 450 miles away. The good news is the thunderstorms decided to go somewhere else and the temperature is in the mid 80’s.


Note to self #3… do not try to make up time on I-90 West outside of Madison unless you have a radar detector.

A few miles down the road the Columbus County Sheriffs Department was conducting a focused speed enforcement exercise – also known as a speed trip. Sheriffs hidden in the tall grass with radar detectors and eight – count’em– eight patrol cars lined up on the West Bound on ramp to nail us poor suckers.


As I came around a bend in I-90 I see a bunch of patrol cars on the side of the road with red and blue lights flashing. There were four cars pulled over – so I immediately slow down – hah – far too late for that. I look in the mirror and see a fifth patrol car with lights flashing. He can’t possibly be after me, can he? Oh yes he can, and is. So let’s just say I was exceeding the posted 65 MPH signs by some amount (hard to imagine) – at least that's what Deputy Brandsma told me. While Deputy Brandsma was doing the needful I watched half a dozen more suckers being pulled over. The deputy told me they normally give 100 tickets a day when conducting a focused speed enforcement exercise. I have to say he was nice about it and I’ll feel good about contributing to the Wisconsin economy – right.

Needless to say, the remaining 425 miles were spent at a conservative pace. That is until I got into South Dakota. The posted speed limit on I-90 is 75 MPH - cool. 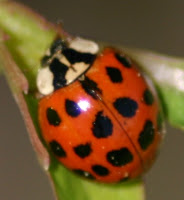 Now here’s a question – do Ladybugs sting or bite? I never thought they did, but as I was buzzing down the road about 300 miles in, with my jacket sleeves unzipped to keep cool, I felt a really painful stinging on my right elbow. First thought was that a bee got up my sleeve and stung me. Well this stinging was pretty bad and just continued. I finally pulled over and took my jacket off. All I could find inside the jacket was a Ladybug (killer Ladybug?). There was a welt the size of a nickel on my elbow with what looked like a tiny stinger in the middle.

Surprisingly I made it to Sioux Falls by 7:30.

I’ll try to execute the “plan” again tomorrow morning – with better results I hope. There is a stop planned at Wall Drug (http://www.walldrug.com/) for a hamburger, and then on into Rapid City.