Day 18: Breaking in the New Tire, Food and Friends

I pulled the panniers, top box and soft bag off of the bike to get it ready for a fun ride with Russ and another friend Steve.
There are plenty of nice roads all through the Coast Hills, so we don’t have a real plan, other than to head out and eventually find something to eat.

About 11:30 we came into Pescadero, a small farming community right on the coast and decide to have lunch at Duarte’s Tavern.

Duarte’s has been in business since 1894 and is well known for their homemade Olallieberry pie, cream of artichoke soup, and cream of green chile soup. 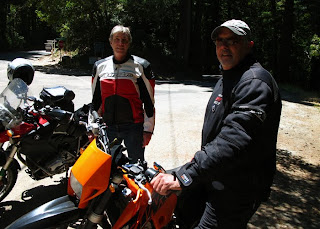 After lunch we did more riding on the back roads and eventually stopped at the top of a steep road that is also a very popular cycling route. 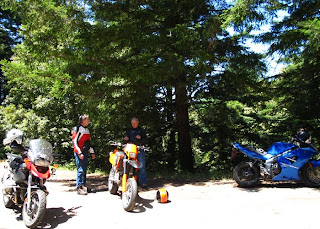 Steve and Russ with the bikes
While the three of us were talking two other friends - George and Steve - showed up on their bicycles – so it was old home week.
This evening I have dinner with my son Shaun and his wife Emily.
Tomorrow I'm off Cameron Park to see youngest son Ryan.
Posted by Dennis O'Dell at 7/22/2010 05:14:00 PM